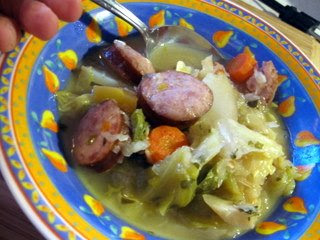 The most fundamental heirloom recipes are often most at risk for being lost in the sands of times. Why? One reason is that "everyone knows" how to make them, and so nobody writes them down. Another is that they're so close to us, so intertwined with daily life and the act of ordinary eating, that the people who live with these recipes don't even think of them as recipes.

Consider the peanut-butter-and-jelly sandwich. If you were raised in the USA, you might snort and say, "PBJ? You don't need a recipe for that. You just make it." And that is precisely what would make a recipe for, or a really accurate and comprehensive description of, that thing difficult to find a generation after it has gone out of style.

Years ago, I had some friends over for a writing session. I had just made a pot of soup, so I shared it with them. Never would I have dreamed of making it especially for guests; it was just ordinary soup.

They went crazy over it. They demanded the recipe. The richly flavored broth, the big, rustic chunks of well varied vegetables, the savory rings of sliced sausage – they enthused over the most ordinary features in their ordinary bowls. I was taken aback. "There is no recipe," I said, "It's just soup."

"What kind of soup?" they wanted to know. 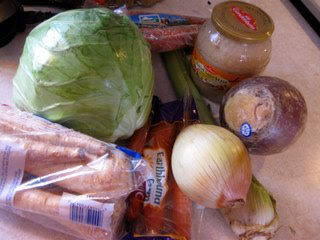 "Cabbage soup?" I said, feeling like I was giving a flip answer. The soup was built around the cabbage. I didn't know what else to call it.

"Well, can we have the recipe for your cabbage soup?"

"Um, OK," I said, and then never did anything about it. The idea seemed weird, writing a recipe for this. Wasn't it obvious from looking at, how it was done? You go into the kitchen and start putting things into a pot until you have soup. What was there to say?

It took me years to notice that I was responding just as home cooks too often do about the everyday food that is the bedrock of their own culture's cuisine. I've been on the other side of the conversation myself, trying to pry open the oyster that somehow won't believe there's a pearl. There's no recipe. It's just minestrone. There's no recipe. It's just tempeh with onions. Or chile ancho stew, or chicken and dumplings.

And that's how stuff gets lost.

Reflecting on my ordinary soup, which seemed so inchoate, so spontaneous and free of recipe or method, I realized there was plenty I knew about it. First of all, it has a name: Kupus. The "u"s are long, as in cuckoo, and the stress is on the first syllable. It means "cabbage soup," and it's the same as the word for cabbage itself. Sauerkraut, an ingredient I'd forgotten to include for years, is called "Kiseli Kupus" (KEE-seh-lee KOO-poos), or sour cabbage. So the whole thing is sort of cabbage to the third power. 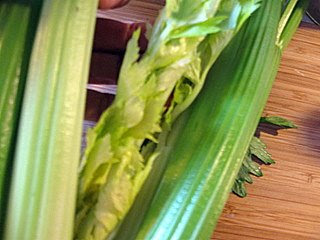 I didn't make this soup up, as I had thought (actually, I wasn't thinking). I learned it from my mother, who made it often. I do a couple of things differently than she did; she used a can of Campbell's vegetable or cream of mushroom soup to fortify the broth, while I use a couple of
cups of my homemade stock -- the type I usually have on hand is chicken. I use a wider range of root veg also. I remember her using potato and carrot; I like to include parsnip and rutabaga as well.

Also, I include the soft, inner green leaves of a celery bunch in my aromatics, sauteeing it along with the onion. This is a trick I learned from my macrobiotic years, along with the roll cut, which I use for the parsley.

Kupus is a wonderful, comforting soup, especially in wintertime. I love to have plenty of broth in 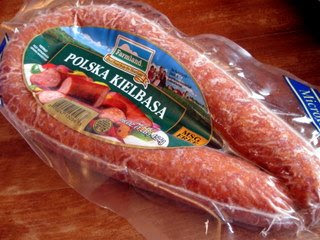 my bowl, and I always take an extra moment to select a spoon that will be pleasant to sip from. I like to have a big chunk of cabbage in my bowl, and carve off bits with the spoon as I go.

The simplicity of the seasoning is, I think, elegant: salt, bay leaves, parsely. Whole peppercorns exude a soft, ember-like warmth that grinding shatters and sharpens (I've tried); it's key to the soup's character. Parsnips, rutabagas, even potatoes -- these are optional. Whole peppercorns are essential.

Ingredients (listed in the order they're added to the pot)

• 3 tablespoons olive oil
• 1 large onion, sliced
• the inside of a bunch of celery, including leaves and tender shoots
• 2 outer stalks of celery, cut in 1/2" crescents
• 4 carrots, cut in 1/2" rings 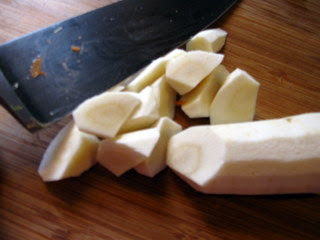 You will need a big pot, at least 6 quarts capacity.

Heat the oil in the pot over medium-low. Add onions and cook until they're a light golden brown, 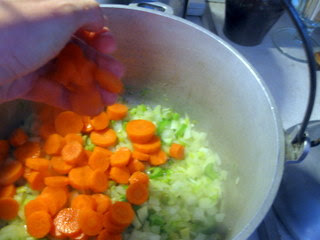 about 10 minutes. Add the inner parts of the celery and cook until softened, about 3 minutes. Add the carrots, parsnips and rutabagas. They don't need to hit the pot at the same time; just keep prepping and adding to the pot as you get them ready.

In a separate pot, heat the stock to a boil and add it to your sauteed veg. Add the salt, peppercorns, bay leaves and parsely. From this point on, it is not necessary to stir after adding anything.

In yet another pot, or a tea kettle, bring several cups of water to boil, but don't add it just yet.

Prep and add the cabbage. When you prep the cabbage, don't cut out the core. That's essential 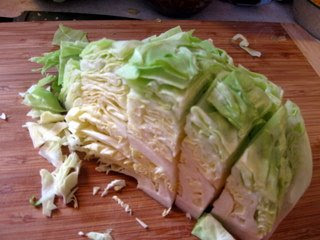 for keeping it in big chunks that stay together during cooking. Just slice off the very bottom, if it looks brownish to you, and discard the outer leaves. Then cut lengthwise through the core to quarter it, and then cut that horizontally into pieces. You'll also have lots of leafy pieces that aren't connected to the core. After you add the cabbage, start a timer for one hour.

Add the potatoes. Add the kielbasa. Add the sauerkraut.

Add hot water until the pot is full to about two inches from the top. Everything should be submerged.

Your soup will be done one hour after you added the cabbage. Taste and adjust the seasoning, adding more salt if needed. 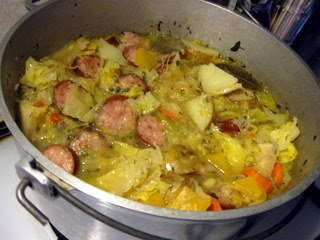 Grind some fresh pepper over the individual servings. It's a different kind of heat than the warmth of the cooked peppercorns. In case you didn't know, don't eat the bay leaves!

Enjoy this soup with some rustic bread for dipping, or all by itself. This is a filling meal in a bowl.

Vesna VK
Madison, Wisconsin, United States
I'm a freelance writer living in Madison, Wisconsin, specializing in food writing and personal profiles. I believe the social, celebratory and expressive aspect of food is one of the key things that makes humans human. If you ask me, the scientists ought to put it right up there with bipedalism and speech. All animals eat, but for us, the eternal quest for flavor and form is woven deep into who and what we are. That’s why I love to write about food, and people who love it. My work on food and other topics has appeared in publications including Wisconsin Trails, Isthmus, Madison Magazine, Corporate Report Wisconsin, and Dane County Kids. I was formerly editor-in-chief of Erickson Publishing, and was the first editor of Brava Magazine (orginally known as Anew). I grew up in Baltimore, Maryland, and I've lived in Philadelphia, Gainesville, Fla., and Los Angeles, where I worked in film production.